As I walked into work this morning I fumbled with my keys and pushed open the side door of the Tucker County Bank Building.  The smells of dust and old wood mixed with the warm and inviting scent of freshly baked cinnamon rolls, reminding me that it was the beginning of another week.  The noise of machines from Jones Auto Works and blasts of trucks passing through town fill the office.  I said hello to Lisa Jones of Chloe’s Sugar Shack (the baker responsible for the absurdly delicious rolls) and turned on my computer.  Who else had sat in this office over the years?  What sights, sounds, and smells did they experience?  Many of you (the citizens of Parsons and Tucker County) know the history of this building.  Many of you have worked or met in this building and many of you helped get it listed on the national register of historic places.  For those of you who are not familiar with its past, here, in several sections, is the history of the Tucker County Bank Building found at the corner of First and Walnut in Parsons, WV.

Before I continue, I have to thank the committee that prepared, created, and successfully submitted the application to have the Bank Building placed on the National Register of Historic Places.  This document is invaluable in its information and allows me (someone without a background in architecture or local Parsons history) to understand the changes that this building has undergone and its significance to the people and city of Parsons.  Most of the information I will be recounting can be found in this narrative which was produced and submitted by the Mills Group.

When I first came to Parsons in August, the Tucker County Probation office had left the Bank Building leaving it vacant.  Since the space for the ON TRAC office in the Senior Center had fallen through, what better location than smack dab in the center of town in one of Parsons’s historic buildings?  Parson ON TRAC would be able to share in the history of this unique building that has survived multiple floods, was the home to a Masonic temple, held countless professional offices from banks to dentists to lawyers to bakers, and, until a few months ago, several dead birds (don’t worry – they are gone now).  One of the amazing characteristics of this building is its longevity.  The structure and outside façade remain virtually identical to what the building looked like at its completion in 1901.  Pictures of the bank building dating from immediately after construction to today show that the red brick Romanesque-revival outside have remained almost unchanged.  Only the addition of brick covering the store front facing Walnut Street and the removal of a parapet with crenellations sometime in the first half of the 20th century indicate time has passed. 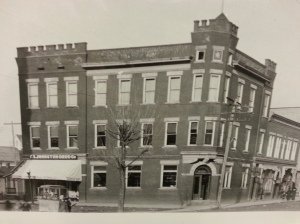 The picture on the left was taken in 1917, the one on the right in 2013.  Notice the difference in the roof?  How about the drug store in the bottom left in both pictures?  The 1917 picture shows FS Johnson Drug while the 2013 picture illustrates the brick that has covered the storefront.  Do you see any differences that we missed?  If you like the historic picture, you can see it hanging in City Hall.  I took the recent picture a few months ago before winter set in.

But what has been going on inside the building all this time?  You will have to wait for our next post!   We can’t give everything away at once, can we? 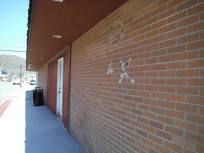 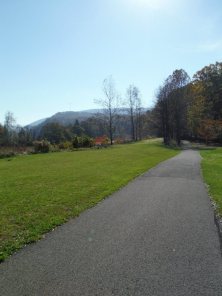